Not such a big deal

, but in this case, the scenes were painted, the statues were sculpted, the music composed, the comedy written, the engines of the special effects were designed and the theater itself built by one guy, the Italian art-stud, Gianlorenzo Bernini.

“That same afternoon, a servant was sent to the Bonarelli house. He found Constanza in bed and there

, fulfilling the orders he had been given by Bernini, he cut her face to ribbons with a razor. So the same hand that had fashioned the most beautiful head in the history of sculpture had

, through a surrogate, mutilated the living flesh it had celebrated.”

But no reputation is bulletproof. Swollen with ego and a well-deserved pride in a lifetime of achievement

, Bernini was awarded a magnificent project, the addition of bell towers to Saint Peter’s Cathedral in Rome.

The centerpiece of this extravaganza would be a statue of St. Teresa of Avila

, a mystic nun who lived in Spain in the 1500’s. Her accounts of her rapturous experiences are vividly described in her writings, and in these raptures she is said to have levitated from her bed, her back arched and her head thrown back and her  eyes closed and her mouth agape. No wonder the carving by Bernini is titled “The Ecstasy of Saint Teresa” 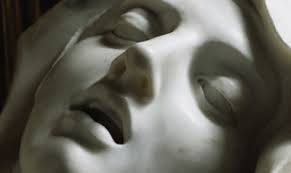 , Teresa writes, “Very close to me, an angel appeared in human form… in his hands I saw a large golden spear and at its iron tip there seemed to be a point of fire. I felt as if he plunged this into my heart several times so that it penetrated all the way to my entrails…The pain was so severe it made me moan several times. The sweetness of this pain is so severe there is no wanting it to end…”

What he achieved in hard stone was a representation of what we are all unconsciously seeking: we know that human relationships are unreliable, and whether we realize it or not

, we yearn for a union with something indefinable, something that we know won’t let us down, ever.