It all happens so fast. One instant the road is clear, the next, a deadly obstacle appears.

Later, your abiding memory of the crash will be the heavy stench of gasoline, because after impact, the Phantom’s gas cap pops off, the Thai women go down, you go down, and gas pours out of the 3.6- gallon tank, soaking your shorts. Before you can squirm out from under the bike, your lower body is bathed in petrol. You drag your left leg out, your foot snags, and gas fills your shoe.

The puddle spreads, but the Thai females are sitting in the middle of the road, stunned, the young one sobbing, the lady whining.

The gas flows under them. You wave frantically, yelling “Get away! Get away!” but they think you’re mad at them and they cringe in fear. Fumes rise in waves from the hot pavement. All it would take is….

So you grab the young one under the arms and drag her clear, then the lady. Their soaked shorts leave faint trails of gas on the hot pavement.

You stare at the t-boned bikes,  so shocked you don’t know what to do. You wonder, What’s the number for 911 in Thailand?

You survey your body. All you can feel is anger and the chill of gas wicking up your shirt from you shorts, running down your legs, sloshing in you left shoe when you move. You’re a walking Molotov Cocktail.

A rusty pickup stops. Somebody makes a call. Another vehicle appears and villagers get out. Someone has a blanket, held up so the Thai women can change clothes. You stand there shivering and sweating. What the hell do I do now?

Then two villagers grab the Thai motorbike and drag it off the road. You don’t like this. You want the cops to see the wreckage, so they can see it wasn’t your fault. But there’s nothing you can do about it now. The blue Phantom sits alone in the middle of the road, on its side, in that black puddle of gas.

A man gets out of a car and comes up to you. He has s thick gold chain around his neck and he looks more Mexican than Thai. He points a finger at you, saying you must pay for damage and hospital bills.

What the hell? It wasn’t your fault, you say. He walks away.

Two official-looking vehicles appear. A brown-shirted cop gets out of each. The villagers surround them. Fingers point in your direction, followed by the word “Farang” (Fah-RANG) meaning foreigner. One cop gives you a long hard stare. You don’t like the way this is going.

You get a brilliant idea. You call Suni, the Thai lady who owns the guesthouse you stayed at. She speaks very good English. Her husband is in Chiang Mai on business and she’s very busy, but despite that, she says she’ll come.

Minutes later she pulls up on her motorbike. You tell her the story. She listens, nods, then looks long and steady into your eyes and tells you she’ll do what she can, “But whatever happens, you must, you must, stay calm.”

You start to wake up to what’s really going on. Outrage flares up in you. But this is not America. This is the East. If you blow up, you will lose face, and along with loss of face, any chance at justice.

Suni approaches the crowd. She puts her palms together, bows slightly to the cops, and starts talking to them. Suni is a pretty lady, with eyelashes so long they make a breeze when she blinks, so the cops give her their full attention. There is some more conversation, then Suni comes back to you and warns you again that you must stay calm.

You hands fist up, you belly tightens, you’re heart hammers—you’re ready to fight—but the calm look on Suni’s face tells you it’s pointless to argue.

You force a smile and thank her. Then she goes back to the cops. You sense there’s some kind of ritual going on here. Suni chats with them again, and it dawns on you that this woman is walking a tightrope here. She’s a member of this village. She is jeopardizing her position by coming to the aid of a farang, but she is doing it skillfully and with ease. She comes back to you again, says okay, you don’t have to pay the police anything. But you do have to pay for the damage and the medical bills. But the Thai woman looks okay, and when an ambulance comes, only the girl gets in.

You thank Suni again, hoping the sincere look on you face shows her how grateful you are.

The crowd starts to disperse. The wounded motorbike is loaded onto a pickup and a parade forms. You lift the Phantom for a close inspection. The left mirror is trashed and the left-turn indicator is missing its yellow lens. Other that that, it looks unscathed. It starts the second you press the starter, and you take your place in the procession, with one of the cops behind you.

Everyone stops at the motorbike repair shop where you’d stopped earlier. The broken motorbike is set on the ground. It’s central housing is split open.  The repairman comes out, stoops to inspect it, then looks at you. You make hand gestures, to show him what happened, raising your hands in exasperation. He looks at the bike again, stands up and says something.

Then Suni comes back to you. “He says it will cost one thousand-five-hundred Baht.” You sag in relief: his guy could have shredded your wallet if he’d wanted to, but all he’s asking for is about  $47 US

Now the parade heads to the Mai Ai police station. When you walk in, people get a whiff of your petro-soaked clothes and shift to other seats. Suni disappears behind a closed-door. You sit down and wait.

By now the gas has had its way with your tender parts. The whole area burns and itches, begging to be scratched. But you don’t move. Your mind is churning awful numbers, wondering how much they’ll demand, and also, Will they take a charge card?

A few minutes later, Suni comes out. “We have to wait for the girl fo return from the hospital.” She sits down beside you. She puts her hand on your arm. “An agreement has been made with the police. You must pay a total of five thousand Baht for everything, and that will settle the issue.”

That’s about $157. Compared to the figures you’d been churning, it seems like lunch money.

Soon you’re summoned to the back room  The young girl is sitting in front of a cop’s desk. She has a wide band-aid on her shoulder and an Ace bandage on her ankle. She looks at you like you raped her. You are told to sit down.

A paper is presented, filled out on both sides. It’s written in Thai, and the only thing you recognize is you name, written in bold letters. You are handed a pen. You have no idea what you are admitting to doing. You look at Suni. The look on her face tells you to sign. You sign.

When you offer the pen to the girl, she looks away. The cop presents an ink pad. The girl presses her thumb into it, then onto the paper you signed. The cop takes the pen from you and writes what you assume is the girl’s name around the thumbprint.

Then he lifts a camera. Suni says to get out the money and hand it to the girl. You raise the gas-soaked bills, fan them out and hand them to the girl. The cop snaps a photo. The girl takes the money. It’s over.

Outside, you stand in front of Suni, wanting to kneel at her feet for what she’s done, but you can tell by the look on her face that she knows you’re grateful. She has to get back to her guesthouse, so she says goodbye.

Later, you stop at Marble Restaurant, tell your story to Oud (OOD) the owner. He’s sympathetic, but he doesn’t like stories like this getting around because it’s bad for the tourist trade. Later, you talk to Chris, an English expat who’s lived in Tha Ton for eight years. He says the story pisses him off, but adds, “Mate, 5000 Baht? It could have cost you a whole lot more.” You say you got off easy because of Suni. He nods.

You can’t get up the juice to ride out, so you stay at Suni’s guesthouse. But you don’t get much sleep. You just can’t believe how lucky you are.

The next day, you ask if there’s anything you can do to help her. She wants to plant banana trees and flowering bushes, but her husband is too busy to help, so you dig holes in the muddy river bank, grateful for a chance to repay her in some small way.

Before you get underway again, you get the mirror replaced, refill the Phantom, then secure the gas tank lid with packing tape. And you adopt a new strategy for the road.

When you approach traffic on your side, at 5o meters you give them a three-second blast on the horn. At 25 meters, a 2-second blast. If you suspect they still don’t hear, you stay on the horn till you pass. By journey’s end, the palm of you hand is cramping from pressing that horn.

Sadly, the day comes to return the Phantom. When you pull into the shop, Duncan, the owner, gives you a quizzical look. You pull off your helmet, smile big, tell him the bike performed flawlessly. You give him back the half-refund of cash, point to the broken indicator light, but he waves it off. You shake his hand and thank him warmly. If he hadn’t pushed you onto that blue Phantom, you’d have missed one hell of a ride.

Days later, when your plane lifts off from Chiang Mai, you tell yourself your romance with Thailand is finished. Like an overly talkative lover, she’s revealed more than you wanted to know. But you can’t fool yourself. You know you’re hooked. And you’ll be back again next year for another ride.

But before you leave Tony’s Big Bikes on another Phantom, you’ll make sure it has two vital components; a lockable gas tank lid, and a fully functioning horn.

May Lord Buddha smile on your journeys, my friends,

PS 1   A copy of the Thai document I signed in the Mae Ai police station is a Thai Document, Available as a PDF Here. If anyone reading this blog knows a Thai person who speaks English, I would be grateful for a translation. Embarassment precluded me from asking this of anyone in Thailand. 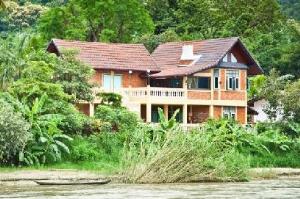 PS 2  If you ever get up to Tha Ton, the best place to stay is Sappaya Guesthouse, owned by Suni and her Aussie husband. If you go to Tripadvisor.com you’ll see a very long list of glowing, 100% positive reviews.

If you see Suni, tell her Bruce Weber said, “Thanks again.” She’ll know what you’re talking about.

This entry was posted in Uncategorized. Bookmark the permalink.