If you ever make it up to these parts, you might like to try a drink called “lao khao.” It’s a form of rice whiskey made throughout northern Thailand, aged long enough to go from the copper tubing into the bottle.

It’s among that class of beverages that repels with the first sip, beguiles with the second, and after the third, you’re in love.

If you’re staying in one of the tiny bungalows down by the river, you can take your bottle out onto your rickety wooden deck, settle into a rattan chair, pour yourself an inch of firewater, and watch the Mekong drift by. 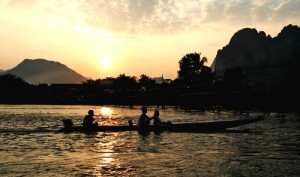 If you’ve come during the rainy season,as it is now, the river will be high and muddy. You’ll see green-bean shaped boats passing up and down, belching black smoke from their worn-out motors, As the sun sets to your left, you’ll feel a breeze rise from the river, cooling the last of the sweat under your arms.

When the half-moon rises, you’ll see very few lights come on across the river, because most of Laos is still mired in the Late Stone Age, its six million people locked in serfdom to a brutal Communist regime. But just as darkness falls, and your tongue is numb from the drink, someone flips a switch and a burst of colored lights comes on across the river, followed by American Pop music played at speaker-shattering volume. Maybe you’ve already been told that the Laos are mad for Karaoke, so you pour yourself another inch, kick back, and laugh yourself silly through a long serenade of drunken Laotians pouring out their hearts to the tune of golden oldies. This may last through three more inches from the bottle, preparing you for the grand finale, which is every drunken Lao in that bar garbling the words to Bertte Midler’s “The Rose”

When their last bit of breath is spent, the lights go out as suddenly as they came on – there’s a curfew that is harshly imposed – and then comes the sputtering of motorbikes and the rattle of rusty pickups as the revelers wind their way home.

, a quiet settles on the river, and maybe on you as well. By now you’ve probably scuttled your travel plans for the next day. thinking another day by the river is needed. You’ll probably feel a sense of heaviness

, less a result of the drink than of the darkness, the silence, and the presence of a primordial river that begins as a trickle in the Himalayas and ends in the South China Sea. That heaviness evokes a desire to do nothing but sit, listen, smell, watch, absorb.

Before you can lapse into somberness, you might swear you’ve heard something down by the river’s bank. You might have heard stories about the immigration problems in the area, about the thousands of Laotians and Burmese who cross the Mekong in the dead of nightt, to disappear into the vast cheap-labor underground the feeds Thailand’s thriving economy.

So you’re leaning, cocking an ear,staring into the darkness, waiting, then yes…. you’re sure you hear them, their rustling in the water, their whispered voices, their footsteps squishing the mud.

Then, once again, silence.

You might find yourself in need of a deep breath, and after you take it, and glance at that bottle of Lao Lao, you’ll be stunned at how little is left. But you can’t forget the sound of those whispers in the dark, so in honor of all the desperate peoples in this world who risk life and limb to get from their Land of Bread and Water to a Land of Milk and Money, you might stand, pour a final drink, raise your glass in a solemn salute to their courage, and wish them all Godspeed.