“…I just want to ride my motor-sickle.”

So goes singer-songwriter Arlo Guthrie’s ode to his beloved red Triumph Scrambler. And so goes the mantra of every man and woman who loves to ride.

Non-riders might have a difficult time understanding a rider’s devotion to his machine. They might shake their heads and consider this devotion to be a form of arrested development. That’s probably because… they’ve just never been there.

They don’t know that riding a motorcycle induces a state of visceral bliss that can’t be conveyed in words. Though this joyous sensation radiates from the body’s core

, it is spawned by a mental abstraction, because the motorcycle is much more than an exquisite mechanical contrivance. It is, in the truest sense of the word, an icon, and it embodies the two most important things in the rider’s life:

To most people who ride

, this metaphorical stuff is meaningless. To them, riding is just totally cool, and the idea of giving it up is unthinkable.

But riding a motorcycle is inherently dangerous. Riding one in Thailand is even more so.

Let’s assume that, despite these obvious risks, you find yourself riding a Honda Phantom, a truly pristine example of the breed, and you’re cruising through northern Thailand on steep winding roads, passing through lush mountainous jungle fit for a King Kong movie.

You’re humming along, lost in that indescribable state that is a common experience to those who ride.

This is soooooo sweet !

Then, on a steep downhill curve to the left

, a series of unavoidable events occurs. The details are irrelevant. All that matters is that whatever skills you thought you had as a rider

, they are not up to the challenge of this situation, and you tumble into every rider’s nightmare – you go down.

You go down, and you and the bike slide right out into the middle of the highway.

In an instant, you’ve gone from bliss to black rage. Your left foot is pinned between the bike and the road and you can’t get up. You shake your fist and pound the asphalt.

Do you rage against a fate that has reduced you to helplessness?

Do you tremble with fear, knowing that on oncoming vehicle could turn you into hamburger?

Do you survey your wounded flesh, hoping no permanent damage has been done?

No, because all you care about at that moment is the damage done to that gorgeous motorcycle.

You try to lift the bike but can’t budge it. Then you’re distracted by the squeal of tires.  You look to your right. A pickup truck swerves to miss you, then jerks to the side of the road and skids to a stop.

The driver, a dark-skinned Thai man wearing a wife-beater undershirt, camo pants and flip-flops runs to your side. He lifts the bike off you

, pushes it to the side of the road, drops the kickstand, leans the bike onto it, and without even looking at you, he jumps back in his truck and speeds off.

Stupified, you stand there in the middle of the road, staring at the vanishing truck: this guy just did you a serious favor, and you didn’t get a chance to say thanks.

You limp to the side of the road. You don’t feel much pain yet – a surge of endorphins has seen to that – but all you really care about is the bike.

When you left Tony’s Big Bikes in Chiang Mai, this bike had nary a scratch on it. As far as you can tell, you are the first one to lay it down. You are not proud of this.

So you survey the damage. The headlight is cockeyed and its rim is scratched up. The left mirror is bent. The  rubber foot peg is bent too, and the left saddlebag is scuffed, but worst of all, the voluptuous gas tank has a dent, maybe a half-inch deep and about the size of a tennis ball.

You fuss with the headlight and get it re-aligned, then you stand back and look at the bike. Like a rider thrown from a horse, you know you have to get back on. You straddle the bike and press the starter and the Honda surges to life. As far as this bike is concerned, it’s as if nothing had happened, and if it could speak to you it would say, “Quit sniveling and let’s get going.”

You try to stay loose, but gradually your body stiffens and your left leg feels like you’re standing too close to a blowtorch. As the days pass, these aches and pains don’t let up much, but when you take the bike back to Tony’s in Chiang Mai, the worst pain is in the middle of your chest. It’s the same feeling you’d have if someone had entrusted you with a fine horse, and you’d returned it to the stable lamed up.

You’re legally responsible for the damages. The owner

, an Englishman named Duncan,  is very reasonable about this, and you leave feeling grateful. To him, the bike is just a financial asset. But to you, it is… more.

Most people who hear you story will shake their heads

, thinking it exposes your distorted emotional attachments and immature disregard for risk, not to mention a complete loss of perspective.

And, they’d be quite right.

But then, that’s what love is all about, isn’t it?

PS. For the morbidly curious, corroborating photos showing the damage to the writer’s body are readily available upon request at weberbruce5@gmail.com.

No photos, however, were taken of the damage to the bike. That would have been much too painful. 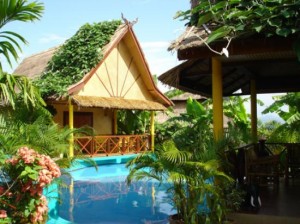 , if you’re ever lucky enough to be in northwest Thailand, do yourself a favor and stay at Old Trees House.

After you cross the bridge going out of Tha Ton, watch for the sign on your left. Turn and go up the steep gravel drive, then walk into the gardens. In the cool shade, you’ll see lush plants with exotic colorful blossoms backed by a thousand shades of green. You’ll hear the gurgle of fountains, the chirping of birds, and the soft murmur of Thai women’s voices.

You’ll see six brightly painted houses, all with big porches, tucked into the manicured foliage, around a free-form pool with two waterfalls.

By the time Paolo, the owner, comes out to greet you, you’ll feel like you’re on a morphine drip.

The only downside to Old Trees House is, it is very hard to leave.

And the breakfast is always first-rate.