Another minor issue is that the train system in Mumbai is among the most dangerous in the world. Every day

, 7.5 million people commute in incredibly cramped coaches that ride over broken down rails. In 2015

, 3304 people were killed. Most train stations are equipped with morgues to handle the bodies.

This lunch delivery work has been done since 1890

, without input from time-and-motion experts or computer geeks, by a group known as dabbawalas.  The Hindu name, roughly translated, means “One who carries a box.”

Eating out at lunch is too expensive for most, and they consider office cafeteria food to be of inferior quality. Many are vegetarians with strict dietary requirements. So the meal must be prepared at home

, picked up by the dabbawalas, grouped together at various checkpoints around the city, and routed from there  to their destinations, some more that 30 miles away.

The dabbawalas pay is around 8000 Rupees (roughly $131 per month). Their jobs are handed down over generations and require a six-month apprenticeship. Although the system has an official hierarchy

, the dabbawalas work without supervision and consider themselves to be free men, relishing the fact that they work without bosses. 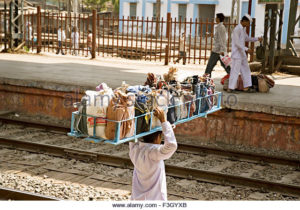